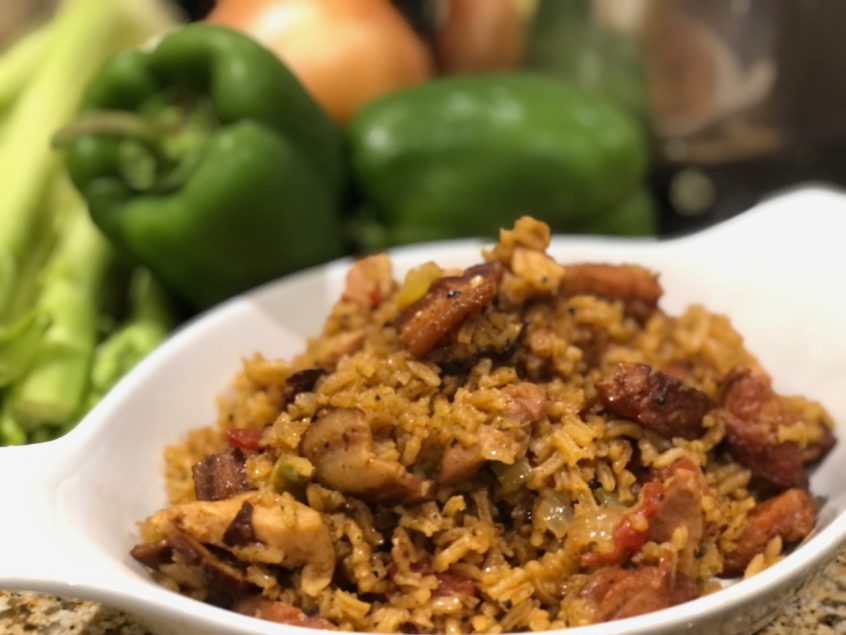 Jambalaya is probably the dish most synonymous with Cajun cuisine.  The cajuns of Louisiana began their migratory journey in the 1600’s when they left France for Nova Scotia where they settled a colony called Acadia.  The British drove them out in the 1700’s and they migrated south through the Low Country of South Carolina and Georgia.  They eventually made it to the bayous of Louisiana where they settled to take up their traditional living of fishing, trapping, and farming.  Today’s Cajun cuisine is the result of the Acadians from Nova Scotia and their original French heritage blended with the ingredients of Louuisiana.  According to the Acadian Dictionary (Rita and Gabrielle Claudet, Houma, Louisiana, 1981), the word “jambalaya” “…comes from the French ‘jambon’ meaning ham, the African ‘ya’ meaning rice, and the Acadian language where everything is ‘a la.’

When the bacon is rendered, use a slotted spoon to remove the bacon from the pan and transfer to a bowl that will be large enough to hold the bacon, sausage and chicken after browning.  Add the andouille sausage to the bacon grease in the pan and cook until the sausage is browned and heated through.  Using the same slotted spoon, remove the andouille and add the chicken to the pan.  Add additional oil if the bacon grease has cooked away.   Season the chicken with a good sprinkling of kosher salt and freshly ground black pepper.   Cook the chicken until it is browned on all sides.  It will continue to cook in the rice so it doesn’t need to be done.  When the chicken is browned, remove it from the pan and add to the bowl with the other meat.

Add the celery, pepper, and onion to the pan.   Sprinkle vegetables with the Cajun seasoning blend and stir to coat with seasoning and oil.  Cook vegetables until they begin to soften.  Add the garlic and rice to the pan and cook until the rice turns even more opaque and makes a slight cracking sound.

Deglaze the pan by adding the V-8 juice and scraping the bottom of the pan vigorously with the straight edge of a beveled scraping tool.  Continue to deglaze the pan with the chicken broth.  Add the canned diced tomatoes and the reserved meat.  Mix everything together well and cover the pan.  Transfer the pan to a preheated 350-degree oven and bake for about 45 minutes.  Remove the pan from the oven and stir to fluff up and mix before serving.