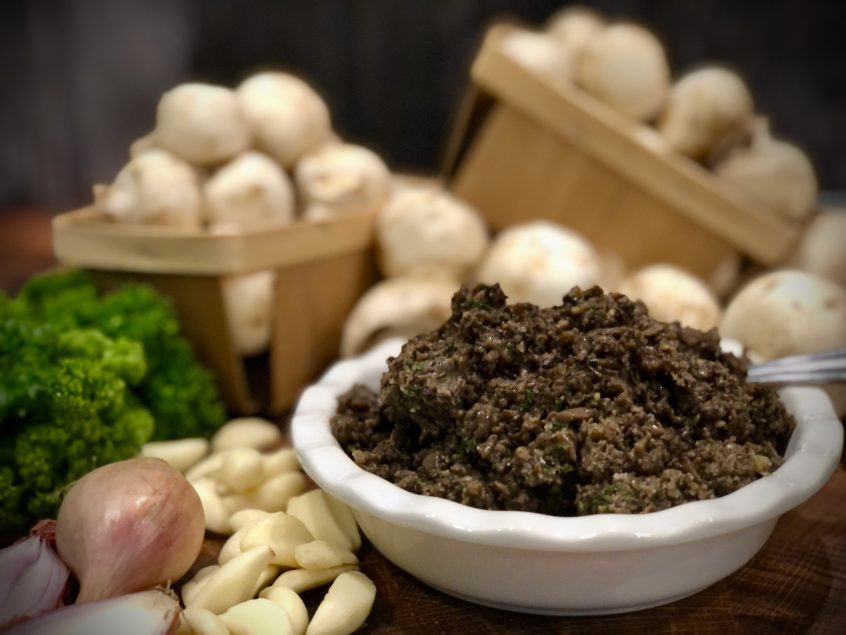 Mushroom duxelles is something that might be unfamiliar to you. It’s a staple in classic French cuisine for its use in Beef Wellington, aka “Bouef en croute”. Outside of classical French cuisine it’s not that well known. In short, it’s a cooked paste of finely chopped mushrooms, shallots, garlic, parsley, and either brandy or madeira wine. As an ingredient in Beef Wellington it is used for coating the seared beef tenderloin before being wrapped up in puff pastry. It adds a rich earthy flavor to complement the flavor of the beef. Because mushrooms are estimated to be about 85% water, it’s important to cook the mixture until it’s a thick paste-like consistency to concentrate the flavor and keep from having a watery mess when the meat is wrapped and baked in puff pastry.

Even if you never aspire to cooking beef wellington, I’m here to suggest you may still want to consider having it as a freezer pantry item for its multitude of uses.

If you think of other uses, please share them in the comments!

Trim or break mushrooms into smaller pieces and pulse in a food processor until finely chopped, scraping down the bowl as needed.

Preheat a 10-inch skillet over medium-high heat until the heat waves can be felt when your hand is held about 6 inches above the surface of the pan.  Melt butter in the skillet over medium-high heat.  Add mushrooms, shallot, garlic, and 1 ½ teaspoons salt and ½ teaspoon black pepper. Cook stirring often until browned and nearly all moisture has evaporated, about 6-8 minutes.  Deglaze the pan with the madeira wine and cook until no liquid remains.  Add chopped parsley to mushroom mixture and spread on a plate and refrigerate to cool completely.

Use or package in zip-top freezer bags and freeze for future. use.