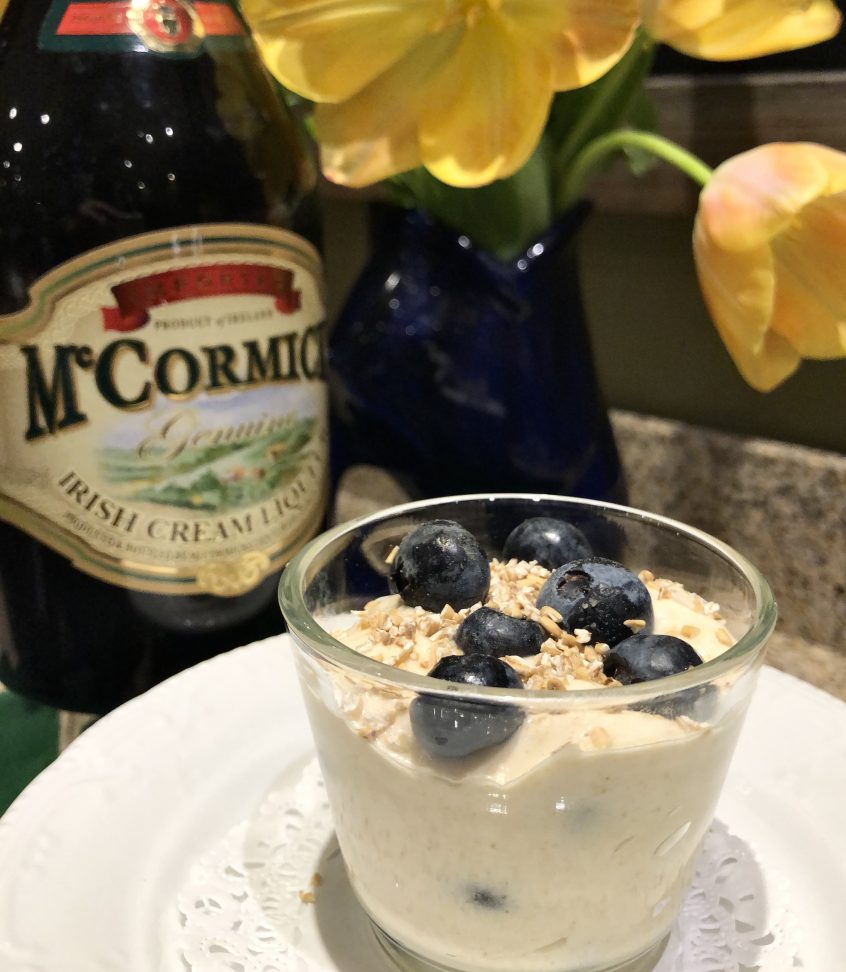 I have to admit that I wouldn’t normally think of Irish cream liqueur as a flavor I’d typically pair with blueberries. It was that odd combination that caught my attention in a book on Irish desserts. I tested it out of curiosity and found that much to my surprise, the lemon tempered some of the heaviness of the Irish cream and it all worked quite nicely with the fresh blueberries! I’ve tweaked the original recipe here just slightly. Toasted Irish oatmeal adds a nice nutty and crunchy contrast to the soft and light mousse. It would be a perfect dessert for a richer meal. Fresh raspberries would taste delicious as well. Just be careful when folding in the berries as raspberries are more delicate than blueberries.

Preheat oven to 350 degrees (325 convection).  Scatter oatmeal on a small pan and toast in the oven for about 10-12 minutes, or until lightly golden and nuttily aromatic.  Remove oats from the oven and set aside to cool.

Combine ¾ cup of granulated sugar, 1 egg, 1 egg white, the lemon zest and juice, and salt in the top of a double boiler or a stainless-steel bowl large enough to fit over a saucepan of simmering water.  Beat the mixture well to dissolve the sugar and blend the eggs.  Add the Irish cream liqueur and whisk well to blend.

Place the irish cream mixture over the lower portion of the double boiler (or a saucepan filled with about 1” of simmering water) and cook, stirring and scraping with a rubber spatula regularly, until the mixture thickens into a thin pudding-like consistency, about 12-15 minutes.  When mixture has thickened, remove the mixture from the double boiler and stir in the butter.  Set the pan or bowl in a bowl of ice water to cool the mixture to room temperature, stirring periodically.

In a mixer bowl, combine the remaining 3 egg whites and the cream of tartar.  Begin whipping on medium-low speed until the eggs begin to froth up.  When soft peaks form, start adding the granulated sugar in a steady stream.  When all the sugar has been added, increase speed to high and beat until stiff peaks form.

Divide the mousse between 4 glasses or dishes, mounding slightly in the dishes.  Garnish the top with toasted oatmeal and the reserved blueberries.  Refrigerate for an hour or two before serving.