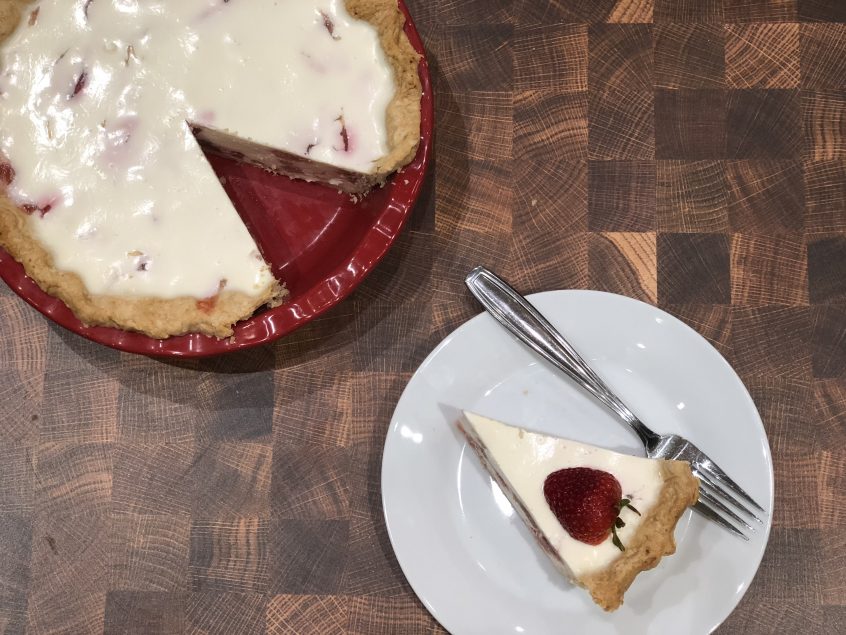 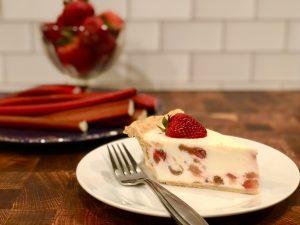 I love the silky texture of panna cotta and some point recently, I thought about what a nice contrast it would make with the crunch of a crust.  As my mind ventured, I thought about the tartness of rhubarb and what a nice contrast that would make against the creamy richness of panna cotta.  Voila…the idea for this pie was born!

2 cups rhubarb, sliced lengthwise and then cross-wise into ½” dice (about 1 lb.)

Place rhubarb in a 2-quart saucepan and sprinkle with ½ cup of the granulated sugar.  Place the sliced strawberries into a small bowl and sprinkle the remaining 2 tablespoons sugar over the strawberries.  Allow the rhubarb and strawberries to sit for about 30 minutes to allow the sugar to pull the juices out.

Preheat oven to 350 degrees.  Line a 9-inch pie pan with pie dough and crimp the top edge. Line the pie crust with a pieces of parchment paper and weigh down with pie weights or dried beans.  Bake for about 30-40 minutes, or until deep golden and baked through.  Remove and cool on counter while finishing the filling.

Pour the juices from the strawberries over the rhubarb in the saucepan.  Start cooking the rhubarb on medium-high heat until it begins to simmer.  Simmer gently and cook until rhubarb begins to soften and break apart slightly.   When rhubarb is tender, turn off the heat and scrape the softened gelatin/water mixture into the hot rhubarb compote, mixing to dissolve the gelatin.  Add the sliced strawberries and mix well.  Set aside to cool slightly while preparing the panna cotta.

Pour remaining cream and granulated sugar into 2-quart saucepan and place over medium heat.  Cook until the sugar is dissolved, and mixture is hot.  Pour into a stainless-steel bowl and add the softened gelatin/cream mixture and vanilla extract.  Mix until gelatin is melted and blended throughout.  Whisk in the Greek yogurt until blended.  Set bowl of panna cotta in a bowl of ice water and stir until it begins to cool and thicken slightly.

Refrigerate for at least 4 hours to allow the filling to set up before slicing and serving.

Flavor and texture is best if you remove from refrigerator for about 15 minutes before slicing and serving.