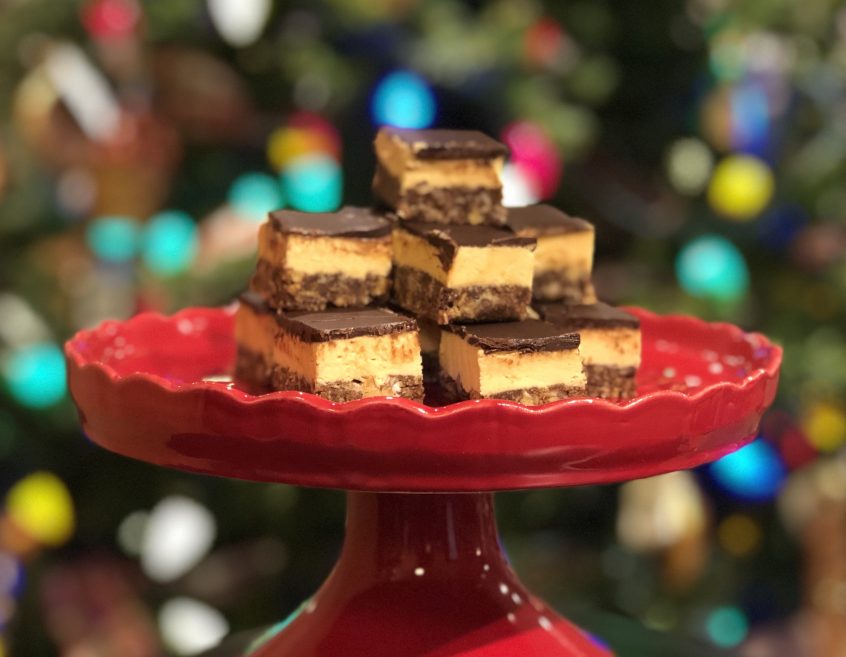 These very rich bars are a popular Canadian cookie/confection. This is a recipe I used in a class called “Holiday Cookies, From our Family to Yours” when I was an instructor at the Disney Institute at Walt Disney World. I asked each member of our culinary department to share a recipe for a favorite Christmas cookie and a short story behind it. This recipe was provided by my boss who said it was a favorite recipe that his wife made every year. I don’t recall much of a story beyond that from him. In researching it, I found that it seems to have first been mentioned in a print in a church or community cookbook in the early 1950’s near Nanaimo, British Columbia. They’re composed of a chocolate, coconut, and nut base topped with a buttercream filling and finished on top with melted chocolate.

Be creative and try other flavors of instant pudding or toppings (butterscotch pudding and butterscotch chips, peanut butter chips, etc.).  They are VERY rich so be sure to cut into small squares!

Place butter, sugar, unsweetened chocolate, and the vanilla in the top of a double boiler and heat over gently simmering water until chocolate is melted and mixture is well blended.  Add the egg and cook and stir for 5 minutes longer.  Remove from heat.

Place butter, pudding mix, and milk in a mixer bowl and beat until creamy and soft.  Gradually add powdered sugar and beat until smooth.  Spread over crumb and nut layer.  Chill 15 minutes.

Melt chocolate chips and butter in a small bowl over barely simmering water.  Spread over second layer and chill until firm.  Cut into 1 or 2-inch squares and refrigerate until ready to serve.