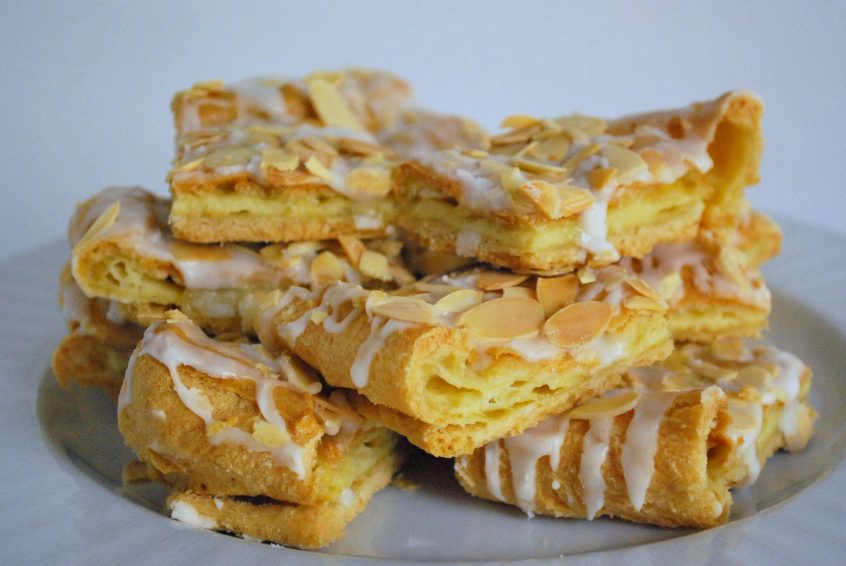 Mom had a cupboard full of cookbooks and those that were regularly used were always up front and stuffed full of little slips of paper.  To me those shelves of cookbooks were full of wonder…reading all kinds of recipes and just imagining what each item might look and taste like was like living in a fantasy world of food.  I knew which ones to look at and which ones to avoid…mom knew EXACTLY where each well -loved and worn slip of hand-written paper was located.  If carelessness led to jostling of the filing system known only to mom, it wasn’t going to be good!  I therefore tended to stick to the lesser used cookbooks that were often the result of product premiums.  You know the type…”send in five proofs of purchase from our products and receive our special cookbook”.  Thus was the manner in which I became enamored with the “Gold Medal Century of Success Cookbook”.  Printed for the centennial celebration of Gold Medal flour in 1979, I loved flipping through the pages. The recipes ranged from savory items such as chicken & biscuits to various cakes, cookies, and pies.

One item I was particularly enamored with was called “Danish Puff”.  I don’t know if it was the name, or the photo that caught my eye first.  Back then, things that were named after foreign countries or had foreign words in them were the epitome of “fancy”.  The pastry itself looked quite difficult…layers of flaky pastry with a custard-like filling, a powdered sugar glaze and toasted sliced almonds on top.  Definitely bakery-quality and not something a mere child could make!  Or could they?  Wait a minute…the ingredients were pretty basic: water, flour, butter, eggs, extract, powdered sugar, milk, nuts…heck, everything we had around the house!  Thus was born a tradition…my annual baking of the Danish Puff Pastry for Christmas morning breakfast.  Not just for breakfast…it was also the item that I made and took to my teachers on the last day of school.  Because one recipe makes two coffee cakes each about 10-inches long, three batches of it went together pretty quickly and it was an easy and impressive way to say “remember me when calculating grades over Christmas”!  (Hey..who are you calling a suck-up?  Never!!!)

Christmas 1983- Age 12:  Grandma & Grandpa Schuster, my maternal grandparents were flying out from Nebraska to spend Christmas with us in California.  This was a BIG deal because grandpa didn’t necessarily care to do a lot of traveling.  He had been heard to utter “I never lost anything in California” on more than one occasion.  Grandma loved to travel, but getting both out for a visit was a monumental occasion.  One that called for none other than a Danish Puff!  Mom and dad had left to go pick up grandma & grandpa at the airport.  I was going to set about making a danish puff as a surprise for everyone when they got back. Except…there wasn’t enough flour!  Luckily my oldest brother Dan was home and being twelve years my senior was quite capable of going to town to get more flour.  He may have been capable, but that doesn’t necessarily mean willing…and that he was NOT  I don’t recall why he was so stubborn other than I was the baby brother and that’s what older brothers do to us.  I do recall the end result as he steadfastly refused and said “Besides…boys don’t bake!”.

Christmas 2010 – Age 39:  Twenty seven years later the same brother is a respected cook in his own right and has been known to ask me specific baking questions himself.  Even better…on your newstands this holiday season you’ll find a magazine titled “Popular Plates Holiday Baking – Easy Recipes from America’s Great Chefs” and on page 66 is a chef who started baking at an early age and was particularly fond of Danish Puff pastry!

A reminder that sometimes success is better than revenge!

2 coffee cakes of 5-6 servings each

Cut ½ cup butter into 1 cup flour until particles are the size of small peas. Sprinkle 2 tablespoons water over flour mixture; mix with fork. Gather pastry into a ball; divide into halves. Place each ball of dough on opposite sides of an ungreased cookie sheet and pat out into 12”x3” rectangles, leaving at least 3 inches between rectangles.

Place ½ cup butter and 1 cup water in a 2-quart saucepan. Heat to a rolling boil; add almond extract and flour and stir vigorously over low heat until it forms a ball, about 1 minute; remove from heat. Set aside until cool to the touch or beat by hand or with an electric mixer to speed up the cooling. When mixture is cool to the touch, add eggs; beat until smooth and glossy. Spread half of this mixture over each rectangle. Bake until topping is crisp and brown, about 1 hour; cool. The topping will shrink and fall, forming a custardy top. Drizzle with powdered sugar glaze and sprinkle with nuts.

In a medium bowl, combine 1 ½ cups powdered sugar, 2 tablespoons softened butter, and 1 ½ teaspoons vanilla. Using a whisk, beat in 1 to 2 tablespoons warm water, 1 teaspoon at a time, until smooth and of a drizzling consistency.

*To toast nuts: Scatter evenly on a baking sheet and bake in a preheated 350 degree oven for about 8-10 minutes (depending on quantity), or until nuts become fragrant.